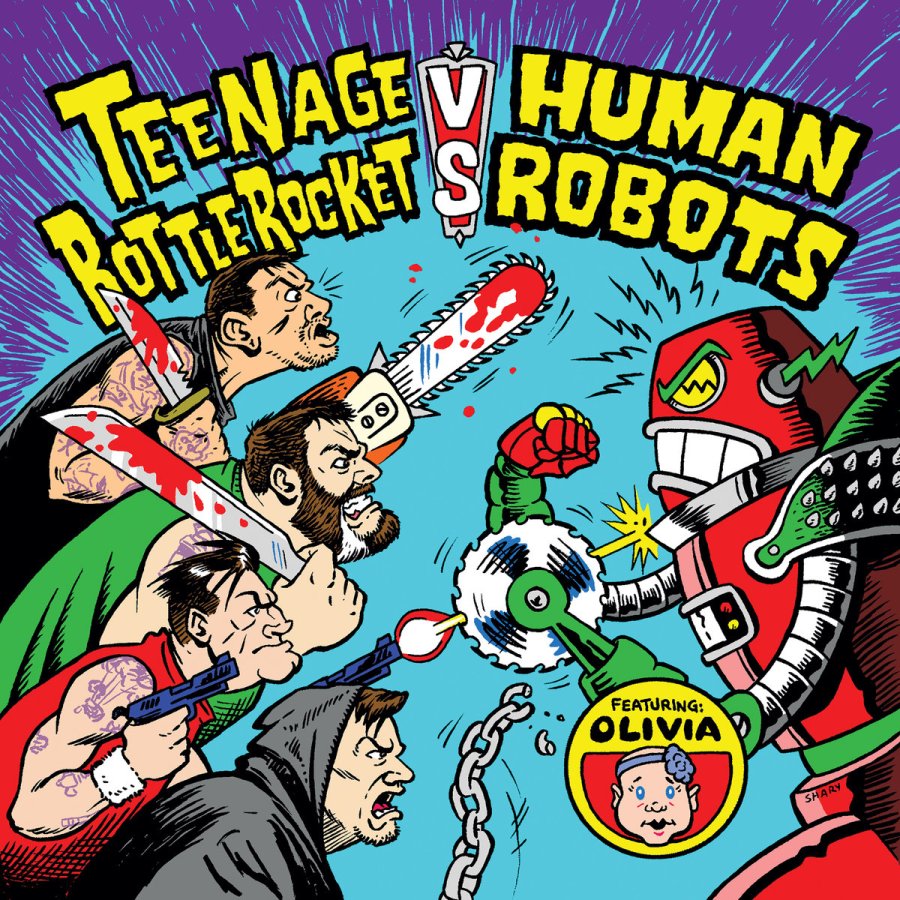 This one can be considered as short, but sweet split 7” released by the full-time band and a brand new project who share a lot of similarities both musically and thematically. Teenage Bottlerocket is a well-known quintet which has been formed in Laramie, Wyoming back in 2000. and after countless of full-lengths, EP releases, split releases and compilation appearances, they’ve gained popularity when they signed to Fat Wreck Chords. Luckily, the band got even better with time and their newer records are surprisingly good and perhaps they’re one of those bands who stayed true to their sound since the day one. Human Robots is a one-man-band and all the tunes are composed and performed by Ray Bottlerocket’s son Milo, so this is his first recording ever! Both songs were recorded during Teenage Bottlerocket’s Stay Rad! sessions, so Milo give it try and succeeded in his aim to record these fine punk rock compositions. Teenage Bottlerocket are the first on the bill with a song called Olivia Goes To Bolivia. This is a standard Teenage Bottlerocket tune, a classic mid-tempo punk rock song with a simple, but yet effective riffs and melodies. This song is accompanied by a cute solo which is so characteristic for their tunes and to be fair, you can’t go wrong with their music. Next one is Everything To Me, a slightly slower pop-punk love song with a lot of sarcasm and good humor involved in the lyrics. It’s an instant radio hit and I predict a great future for this one. Human Robots is coming up next with Step On ‘Em All, pretty short, but a great take on the Ramones sound. To be fair, this sounds even better than a lot of Ramones clones I’ve heard before. Coming up next, it’s a great teenage love song called I Want To Hang Out With You, a cool song about skipping school to hang out with a girl. It’s a bit slower than a previous one, but considering these songs are performed and recorded by a teenager, they fit nicely to the concept of this split recording and I predict a bright future for this young punk rocker. The cover artwork is done by the legendary Chris Shary who illustrated some of the famous albums for Descendents, ALL, Good Riddance, 7 Seconds, Stupids, White Flag…etc. and the art depicts guys from Teenage Bottlerocket confronting the fearsome giant robot. It goes amazing with the presented music and it’s such a treat to all the peeps who demand good art with some amazing music. Luckily, Teenage Bottlerocket somehow convinced Fat Wreck Chords to publish this one as a 7”, so go ahead and grab this fine piece of plastic for yourself.